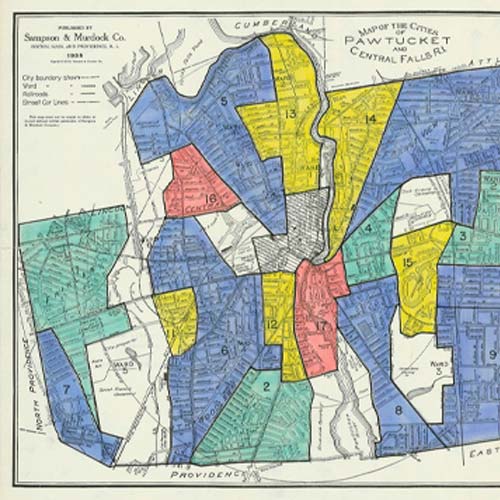 As part of the Climate Safe Neighborhoods (CSN) partnership, Groundwork Rhode Island is working with residents and stakeholders to understand the relationship between the cities’ history of race-based housing segregation and the current and predicted impacts of climate change.

Through an analysis of historical redlining maps and modern satellite imagery, we’ve found a relationship between government-led housing segregation of the past century and vulnerability to extreme heat and flooding in Providence, Central Falls, and Pawtucket today. Unsurprisingly, communities that have been subject to redlining are less likely to have trees to mitigate urban heat island effect and are more prone to flooding.

Over the next year, Groundwork Rhode Island will work closely with residents in Pawtucket’s Woodlawn neighborhood and in Central Falls to prioritize climate resilience measures and participate in a Climate Safe Neighborhoods Alliance. The alliance will be composed of residents and other community stakeholders, and will seek to educate, engage, and organize residents as well as conduct climate resiliency demonstration projects, door-to-door outreach, tabling at existing community events, and outreach to local decision-makers.

Read more about the history and present-day impacts of redlining from the National Community Reinvestment Coalition HERE.